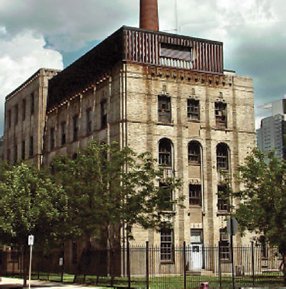 The Near West Side needed a new park, and had been promised one by then 2nd Ward Alderman Madeline Haithcock. The residents were eager for it, and understandably so. However, Preservation Chicago strongly objected to what park planners had decided to sacrifice in order to create this new park: A unique building that was both architecturally and historically significant. The building was located at the Northeast corner of Sangamon and Adams, and was the Orange-rated Illinois Charitable Eye and Ear Infirmary.

At that time, Preservation Chicago recommended that the building be restored to its original dignified presence as a field house for the new park.

Update:Facing insurmountable resistance from community leaders against the proposal to preserve any portion of the former building as a field house for the new park, the building was completely demolished.  The new park opened in the summer of 2010 and, if you look closely, you will be able to observe brick and terra cotta details embedded into the concrete retaining walls that were salvaged from the demolished building.