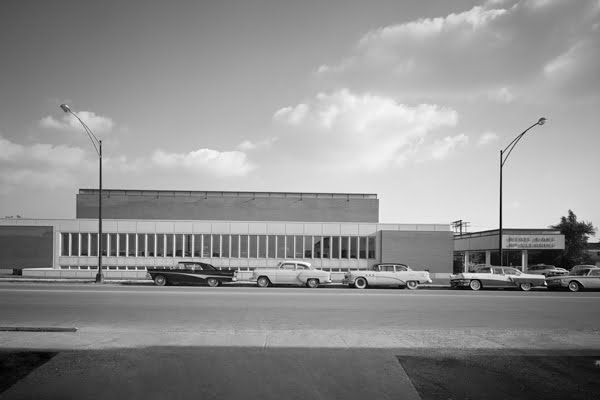 Overview:
Standing as an important early work of world-renowned Chicago architect Harry Weese, the State Bank of Clearing is unique in the realm of bank building design. Featuring a stunning banking lobby with angled columns and a distinctive drive-up window configuration, the State Bank of Clearing is an important example of Mid-Century Modern bank architecture. Vacant for years, the building is currently for sale and awaiting a reuse. However, demolition is a possibility for the site.

History:
The State Bank of Clearing was the main bank in Clearing even before it was annexed to the city in 1915. When the bank outgrew its previous facilities at the corner of 63rd and Central, it opted to move a few blocks east and hired architect Harry Weese to design a new structure. The resulting design by Weese, and architect Ezra Gordon, another prominent member of Weese’s firm, was revolutionary for its time. Because of the limited size of the site, Weese devised a unique-for-its time drive-up structure that was integrated into the bank and allowed tellers to service both walk-up and drive-up tellers at the same time. The interior grand hall was simple but dramatic and featured angled columns that reflected Weese’s design principles and were very similar to the support columns on Weese’s United States Embassy in Accra, Ghana. The State Bank of Clearing was prominently regarded as innovative and unique upon its construction. It was featured in numerous period architectural journals, including Architectural Record and Architectural Forum. Additionally it was featured as a building of note in the 1969 edition of the architectural guidebook Chicago’s Famous Buildings.

Threat:
The building has stood vacant and for sale for a number of years since the last bank tenant moved to a neighboring location. The drive-up structure and other elements are deteriorating and it is in danger of demolition by neglect.

Recommendations:
A new tenant willing to restore and reuse this architecturally significant structure must be found. This building is also a clear candidate for Chicago Landmark status, and the Chicago Department of Housing and Economic Development is likely willing to support landmark status if a new owner desires such a designation in order to qualify for historic tax incentives for the building’s restoration.