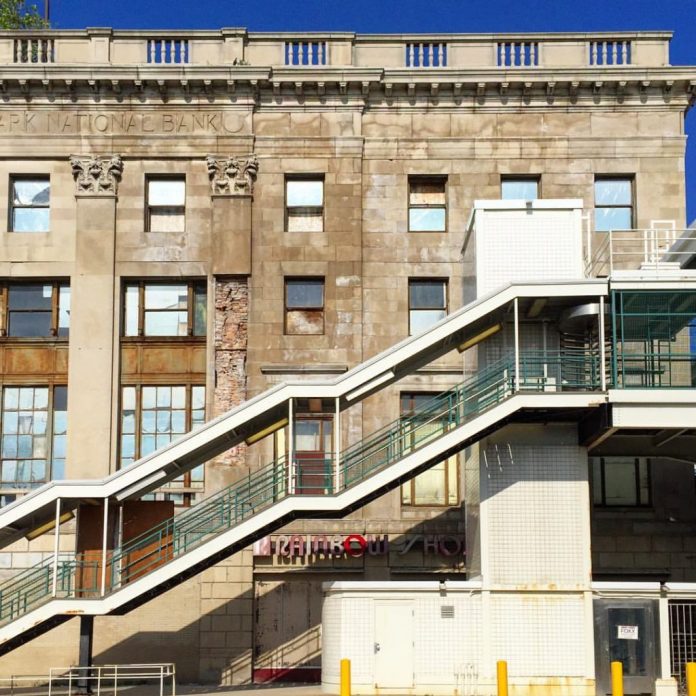 The Washington Park National Bank Building was constructed in 1924 by architect Albert Schwartz as part of an expansion and relocation of the bank to a more prominent site. The building, constructed of Bedford or Indiana limestone, would include retail shops on the 63rd Street side of the building, with the bank operating from the Cottage Grove frontage.

In later years, the 63rd and Cottage Grove area, contained many great entertainment venues, hotels, ballrooms and was a prominent center of the South Side. The racial make-up of Woodlawn changed beginning in the 1940s, to an African American community, and the area continued to be a prominent location for Jazz-era clubs and all forms of entertainment and shopping, with the community flourishing into the 1960s.

In recent decades, this once prominent intersection has experienced great decline and this amazing banking structure has fallen into disrepair and was mothballed. The building still remains empty and efforts are underway to restore other prominent buildings that remain in the vicinity. Recently a nearby ballroom, known as the “Cinderella Ballroom”, was restored, in addition to a former hotel across the street, known as the Strand Hotel. We at Preservation Chicago are of the opinion that selecting this structure as one of our Chicago’s Most Threatened Buildings for 2016, may encourage a reuse of the building and a restoration of its façade.