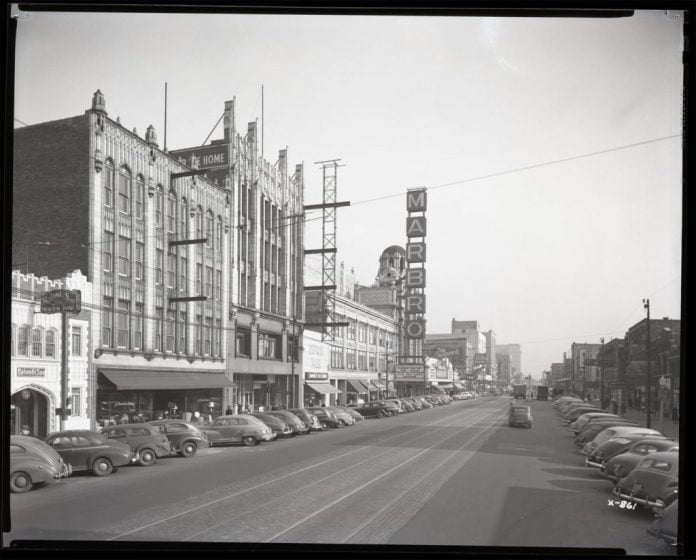 OVERVIEW:
As Chicago grew exponentially in the late 19th and early 20th Centuries, outlying shopping districts began appearing along streetcar lines and elevated train routes. One of the largest was located in West Garfield Park, centered at the intersection of Madison and Pulaski (previously Crawford Avenue). Featuring department stores, shoe stores, movie palaces, hotels and other amenities, this “mini downtown” was arguably the shopping center for the entire West Side. Numerous four, five and six story structures gave it the appearance of a major downtown district. With a varied collection of Art Deco, Art Moderne, Modernist and Gothic architecture by an eclectic mix of architects, Madison-Pulaski is one of the largest intact outlying shopping district in the city, especially with the recent demise of its South Side counterpart at 63rd and Halsted. As the neighborhood began to decline beginning in the 1950s, the shopping district began to decline as well, and more recently many structures have fallen into disuse or disrepair. The area currently includes numerous abandoned and underutilized structures, and if not protected, much of the area may face demolition by neglect in the near future.

HISTORY:
Though the West Side’s first commercial district sprang up along Lake Street, activity began to move to Madison Street beginning in the 1890s with its bustling streetcar line and without the overhead “L” line along Lake Street. Hotels began to spring up around Garfield Park and a busy commercial district developed, especially in the boom years following 1914. Department stores, movie palaces (unfortunately all since demolished), and a diverse collection of other retail structures were constructed, mostly of a very high quality and of varied architectural styles. Many storefronts and structures were modernized or rebuilt over the years, using the styles of the time, whether Art Moderne in the 1930s or Mid-Century Modern in the 1950s. Beginning in the 1950s, the surrounding neighborhood began to experience a steep decline. Still, most of the retail structures in the neighborhood  remained  in  use until  relatively  recently,  but  its  future  is  in  jeopardy  if actions  are  not  taken soon.

INDIVIDUAL HISTORY/THREATS:
While  the  only  significant  structure  currently known to face an explicit threat of demolition in  the  district  is  the  historic Hotel  Guyon (1927, Jens J. Jensen; listed on our Chicago 7  in 2013  and  2014)  other  structures  are  in various  stages  of disuse  or  disrepair.  The major  intersection  of  Madison  and Pulaski itself remains intact on three corners, including  the iconic  Art  Deco  Madison/Crawford building  on  the northeast  corner  (1930,  Arthur  Howell  Knox),  and Modernist  former Three  Sisters  Store  (1948,  Leichenko  & Esser)  on  the  northwest  corner.  The  former Mid-Century Modern Goldblatt’s Store (1951, Friedman, Alschuler & Sincere) on the south-east  corner  of  the  intersection  has been heavily  altered  but  original  elements  of  its sleek design are still evident. Further west at 4042  West  Madison, the  former  Spiegel/L Fish Furniture Store (1927, B. Leo Steif) presents a unique terra cotta blend of Art Deco design. Numerous other structures (including the  former  Madigan Brothers  Department Store  at 4030 West  Madison) are in varying stages of disuse, and face a serious threat of demolition by neglect.

RECOMMENDATIONS:
While  the  Madison-Pulaski  shopping  district  remains mostly intact at the present time, it is in extreme dan-ger of demolition by neglect. With the almost complete demolition of Chicago’s formerly largest outlying shopping district at 63rd and Halsted over the past few decades, Madison-Pulaski remains one of the best examples of this important form of early 20th Century shopping  district.  Moreover,  many  of the structures  in  the district are of architectural note and form a unique and complete streetscape with buildings of varying heights and sizes. The area (including portions of Madison and Pulaski streets, as well as surrounding streets) should be designated  a  Chicago  Landmark  District,  so  that this uniquely  intact  environment  will  be  preserved  for future generations.  In  addition,  the  City  of  Chicago should enact a comprehensive plan for reinvestment in the area so that the buildings can attract new tenants and  be  reused  in  a sensitive  manner  that  will  benefit the surrounding community for many years to come.