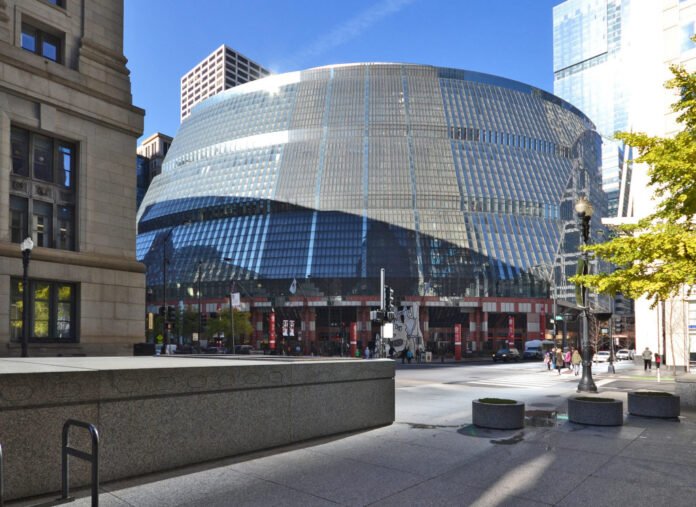 OVERVIEW:
Considered one of Chicago’s most controversial building projects of its era, the State of Illinois Building now known as the James R. Thompson Center, is one of Chicago’s most iconic late 20th century buildings and represented a radical departure from the design of conventional government office buildings of its time. Designed by world-renowned architect Helmut Jahn, the glass and steel building is an important Post-Modern building.

The Thompson Center is currently threatened with sale and demolition by Governor Rauner and his administration. Preservation Chicago encourages that this building be protected and considered for Chicago Landmark Designation.

HISTORY:
The building’s design was meant to suggest a more open and transparent government, while referencing the grand public buildings of the late 19th and early 20th Centuries. Architect Helmut Jahn specifically noted in a public lecture in the 1980s on the building’s design, that it recalled the massive dome and vast interior atrium space of the old Chicago Federal Building and Post Office, designed by architect Henry Ives Cobb, completed in 1905 and demolished in 1965.

The unique design of the State of Illinois Building, with its curved walls comprised of irregularly-shaped glass panels presented distinct challenges to the building construction methods of the 1980s. This resulted in construction costs being more expensive than originally projected.

The State of Illinois Building was architect Helmut Jahn’s most significant public building at the time, and a bold idea in its design to represent the State’s Chicago offices. It served as a “second state capital building” to project its influence in Illinois’ largest and most populated city, recognized internationally for its architecture. It was designed to capture the viewer’s attention and signal its importance as a seat of government. The building’s futuristic styling generated, and continues to generate, both support and criticism.

The structure’s grand public 17-story atrium is topped by a vast skylight and stepped glass curtain-wall which spans the entry and extends across most of the building’s footprint. This effect essentially creates a large public plaza both inside and outside the building’s Clark and Randolph entry. It was conceived to welcome the public into a government building, with accessible public spaces on multiple levels and extensive glass curtain walls to represent an open and transparent government.

The State of Illinois Building and its atrium were originally conceived to mix governmental offices with various services and retail, which was intended to reinvigorate the City’s business district along Randolph and Clark Streets. At one time, public music concerts were held in its grand atrium space. This area of the Loop had once been the center of its theater and entertainment district informally referred to as Chicago’s “Rialto District”, which included the Bismarck/Palace Theater, Schiller/Garrick Theater, the Woods, the Apollo/United Artists Theater, and the Oriental Theater. Additional theaters included the Harris and Selwyn/Michael Todd Theaters around the corner on Dearborn, and the Chicago Theater, Roosevelt Theater, Loop Theater, and State-Lake Theater on nearby State Street. The Rialto District was supported by a vibrant collection of famous Chicago restaurants, including Henrici’s, Toffenetti’s, Old Heidelberg, Holloway House, Mayor’s Row, Hoe Sai Gai, Stouffer’s, and the Blackhawk, extending eastward to Wabash Avenue.

The site was previously occupied by the legendary 1,700 room, Sherman House Hotel, which stood mothballed from 1973 until its demolition prior to the construction of the Thompson Center. The Sherman was a great landmark and home to many jazz venues, including the College Inn and various hotel restaurants and had been a vibrant part of Chicago since its earliest years. The State of Illinois Building/Thompson Center was intended to channel the energy of The Sherman House and reinvigorate the faded Randolph Street Corridor, one of the oldest sections of the Loop’s business and entertainment districts.

The State of Illinois Building never achieved the vibrancy envisioned by Helmut Jahn and Governor Thompson. Its retail tenants have become more mundane over time and deferred maintenance impacted its appearance. The State of Illinois Building inspired Helmut Jahn’s much acclaimed landmark and highly vibrant Sony Center in the heart of Berlin, some twenty years later.

The State of Illinois Building was renamed the James R. Thompson Center, to honor the longest-serving governor of Illinois from 1977 to 1991. Governor Thompson was a strong proponent in selecting and advocating for Helmut Jahn as the architect for the new State office building and instrumental in selecting the most extravagant and grandiose of Jahn’s design options for the building. 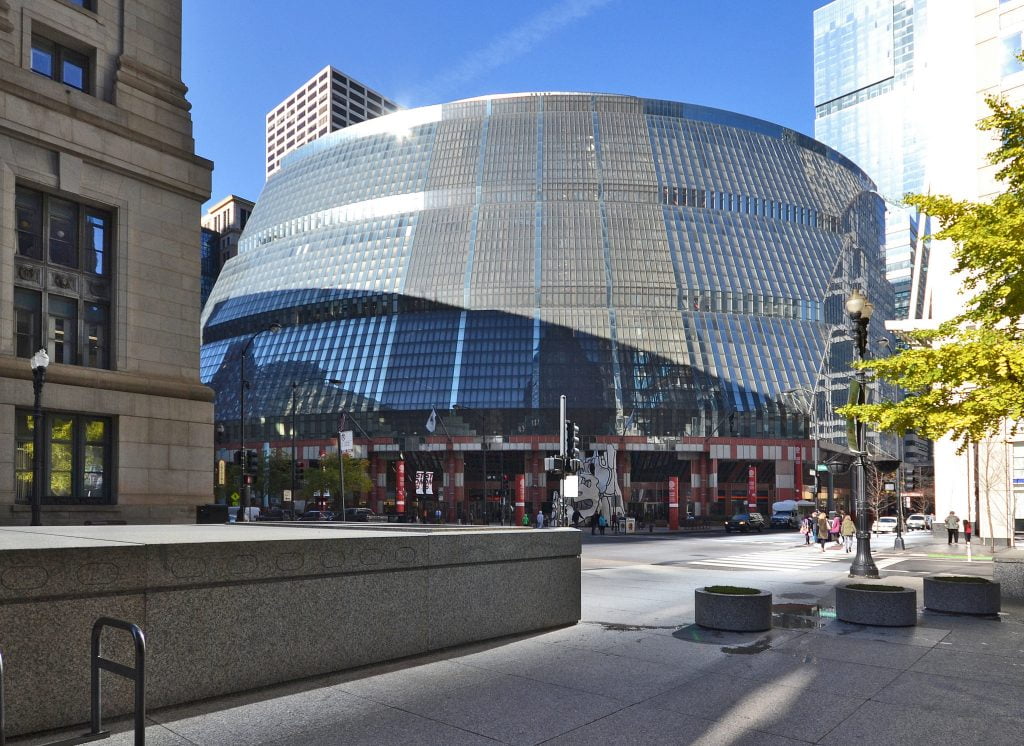 THREAT:
Illinois Governor Bruce Rauner has repeatedly requested that state lawmakers pass a bill allowing him to sell the Thompson Center/ State of Illinois Building. He has cited deferred maintenance and operating inefficiencies, and is drawn to the potentially high sale price of the land. To maximize value, Governor Rauner has requested that the City of Chicago relinquish zoning and land use controls to allow the State of Illinois to command the highest possible price for the sale.

Preservation Chicago believes that zoning, planning and land use controls should not be surrendered by the City of Chicago to another governmental body or private developer. New construction and demolition have significant impact on the livability of Chicago now and into the future, so many factors must be considered in the decision making process regarding planning and development.

Preservation Chicago believes that the scale of the Thompson Center, along with its open plaza and public interior atrium space adds quality of life to Chicagoans by allowing light and air into a dense section of the loop. If sold to the highest bidder, these benefits are almost certain to be lost. Additionally, the soaring central interior atrium was built by and for the people of the State of Illinois, and therefore, should remain accessible to the public as a public building.

Furthermore, the Jean Dubuffet sculpture, Monument with Standing Beast, by one of the world’s most noted Modernist artists in its sweeping public plaza, is a gift to the citizens of Chicago and Illinois and must be protected. We’ve seen important works of 20th century Chicago public art removed (Henry Bertoia’s Sonambient), destroyed (top surface mosaic of Marc Chagall’s Four Seasons), placed in storage (Alexander Calder’s The Universe), or sold at auction (Henry Moore’s Large Internal-External Upright Form). 20th century Chicago public art was a 2017 Chicago 7 Most Endangered, so it is imperative that this great Dubuffet sculpture be protected.

RECOMMENDATIONS:
Preservation Chicago suggests that the City of Chicago move quickly to designate the Thompson Center/ State of Illinois Building as a Chicago Landmark.

This would protect this building, plaza, and public sculpture designed by one of the Chicago’s most famous contemporary architects, whose career began here and whose work is now celebrated around the world from Chicago to Berlin to Shanghai. This is a building of the people, built as a monument and open to all, with many public spaces that should be forever open to all, and efforts to both protect its architecture and vision and activate the building should be implemented.

We urge the State of Illinois and the City of Chicago to work together to protect this significant building. A comprehensive redevelopment plan could correct the deferred maintenance. A tower-addition study by Helmut Jahn’s design firm has suggested that the existing building could accommodate new construction that would add square footage while remaining sensitive to the historic building, atrium, and public space.