Jackson Park, Midway Plaisance and the South Shore Cultural Center have now been part of Preservation Chicago’s Chicago 7 Most Endangered List for a fourth year in a row, noting the threat to one of America’s greatest public parks and boulevards and one of Chicago’s lakefront legacy parks and greenspaces.

We very much welcome the proposed Obama Presidential Center to Chicago’s South Side, but for another nearby site and not on historic public parklands designed by Frederick Law Olmsted and Calvert Vaux, Olmsted Brothers, and with additions by Alfred Caldwell, May McAdams and others of national and world recognition.

The Obama Presidential Center (OPC) has been contentious among residents, citizens of Chicago and elsewhere across the nation because of concerns about gentrification, displacement, and its placement within a historic park belonging to the people of Chicago for more than 130 years. The chosen location is also a lakefront site and subject to ordinances designed to keep the shoreline protected from private development and unnecessary non-public structures—and understood by many citizens to be “forever open and free,” even if this generally applies to lands near downtown in Grant Park. This “forever open and free” idea along Chicago’s lakefront, while revolutionary in concept for a large American city of the 19th and early 20th century, originated in 1836 with the establishment of Lake Park. These values and regulations are challenged and disputed every so often because of political pressures and speculation. It is once again challenged by elected officials who should represent the voice of the people and protect public assets for the public good and not make exceptions for a private development in the city’s parks, lakefront and greenspaces. 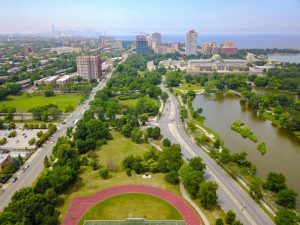 The proposed OPC campus is to be sited on about 20 acres of Jackson Park near the Midway Plaisance at 60th and Stony Island Avenue and extending southward. The plans from the very beginning were flawed, with the University of Chicago and the Obama Foundation, along with former Mayor Rahm Emanuel, suggesting and offering the Chicago lakefront park as a site for a private development in the park. This was an absolutely terrible idea, which has gained traction through political maneuvers and has literally imposed this proposed complex on the citizens of Chicago. Efforts to support this lakefront site in Jackson Park, by the City and officials, have resulted in spending countless taxpayer money – perhaps millions of dollars – in addition to City staff time and resources. This is all occurring when an abundance of nearby vacant land in Woodlawn, the Washington Park neighborhood, and other communities sits idle. The expedited process that saw the City approve the proposed OPC plans was neither transparent nor without controversy. It was simply and essentially a taking of public lands to extend private development on parklands that are considered sacred by the people of Chicago.